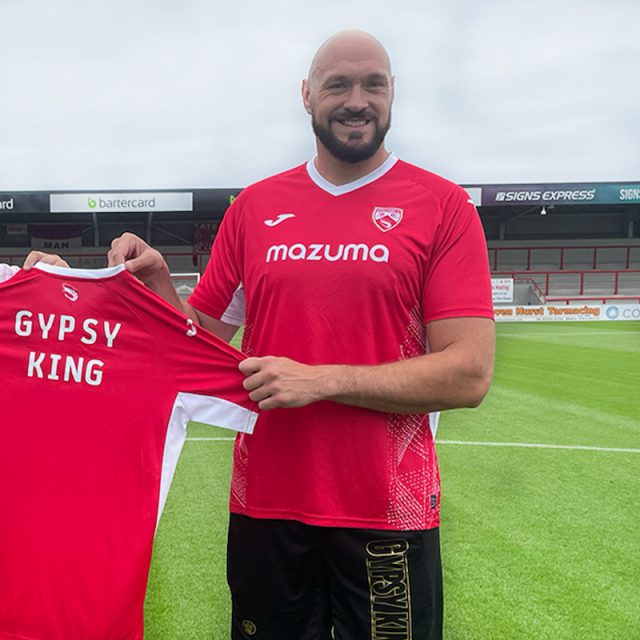 World heavyweight boxing champion and local resident Tyson Fury has joined Mazuma as a sponsor of Morecambe FC. In the upcoming 2022/23 season, the first team Shrimps will don the Gypsy King brand on their home and away shorts as part of the deal Tyson struck with the Club, announced last week.

It has never been a secret that the heavyweight champion has a big heart for his hometown and captions himself as the people’s champion after spending most of his boxing career in the Morecambe area. The modest “Gypsy King” can often be found keeping up his fitness and enjoying Morecambe town’s beauty with his family and celebrity friends, including the likes of Jamie Redknapp, former Liverpool and Spurs Player, and Freddie Flintoff, England’s renowned cricket legend.

Tyson Fury is consistently supporting his local shops, service and the Morecambe area on his social media pages, and Morecambe FC is the latest of his showcase of the town. Fury’s connection to Morecambe football club has been long-running; he has even built his own gym connected to Mazuma Mobile’s stadium. In a statement, he admits his love for Morecambe and how “it is a pleasure to support my local football club”.

The Shrimps Rise to Success

The past two seasons for Morecambe have been a rollercoaster of a ride. After their roaring success at Wembley Stadium in the 2020/2021 season with a one–nil beat against Newport County, they rose to league one for the first time in the Club’s history and since then have sold out many games within their first year of being a league one team.

Morecambe FC’s success brought a much-needed boost to the town. Even with their narrow escape from avoiding relegation 2021/22 season, the support from the town has been stronger than ever before, with ticket sales ongoingly breaking club records.

As they approach the new season, they announced their partnership with the Gypsy King brand with welcome arms with an exciting statement from the Club’s head of commercial, Martin Thomas;

“We have a great relationship with Tyson and are proud to wear his Gypsy King brand on the first-team shorts for the forthcoming campaign.

Tyson is a fantastic ambassador for the Morecambe area, and it’s fantastic to have him onboard. Tyson is one of the most recognisable names in the world of sport and will bring worldwide recognition Club.

He will join an ever-growing list of commercial partners, alongside both local and national brands as well as local businesses the Club has signed in recent seasons. We now have a huge reach across the globe, with a further presence on a worldwide stage due to this partnership.”

As Morecambe Football club enter the new season, they continue with their regained manager, who brought them to victory for league one, Derek Adams. Adams, who has taken on seven new players, is pleased with what the team have achieved over the pre-season period and claims the team is looking forward to the upcoming season.

The Future of Fury’s Involvement with Morecambe FC

Although the news has only just broken, it is said that whilst this initial deal is only a short term, there is to be a further announcement which will see the Gypsy King extend his partnership with the Club even further.

As a sponsor of Morecambe Football Club, we wish them all the luck for the upcoming season and if you are visiting the Mazuma Stadium, keep a look out for Maz, who will be cheering and supporting the team with the fans.