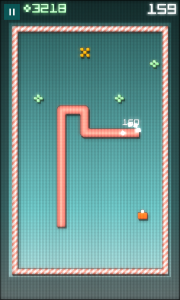 By far one of the most iconic and addictive mobile phone games was Snake. Years ago, early adopters of Nokia devices would lose hours playing with what was – even back then – somewhat retro.

You started off with a thin strip – the snake – that you moved around on your tiny colourless screen using one of four buttons (top, bottom, left and right). The aim was to eat up a “square dot”, after which you grew and grew.

Within your box, the longer your snake became, the more challenging it was not to “run into yourself” as you went out consuming more square dots. In such an instance, the game would be over.

It was compulsive, with mobile phone users competing over how long they could get the snake to be without crashing into itself. Some call it the first game of the mobile generation.

Needless to say, with the advent of smartphones and the increasing sophistication of these devices, the game lost favour (Nokia also dwindled in its monopoly of the industry). Other games were available, in full colour and offering users different challenges.

It was simply one of those things and while the game was still highly playable – the very simplicity of it is its unique selling point – smartphones again “reinvented” themselves with cameras, movies and apps.

However, it still occupies a special place in our hearts and guess what? A new version is soon to be available on your smartphone. Dubbed Snake Rewind and developed by Taneli Armanto, the original creator of Nokia Snake, this is a modern day upgrade on a classic.

And, to say the least, while it bears all the characteristics of the original, there are some cool changes for a 21st century twist. This includes the ability to, as the name suggests, “rewind the snake” if it crashes; and lots of new types of square dots – referred to as fruits – to chomp on.

It is available on all the major operating systems – including iOS, Android and Windows – and is, best of all, free to download. That said, if you so wish, you are able to make in-app purchases to amplify your experience.

“Created together with Rumilus Design, Snake Rewind takes the iconic elements and intuitive gameplay from the original Snake game and combines them with cool visual effects, sounds and innovative new features,” the official press release stated.

“The game can be immediately picked up by everyone, while offering enjoyment for a long time with many fun and challenging goals and discoveries.”