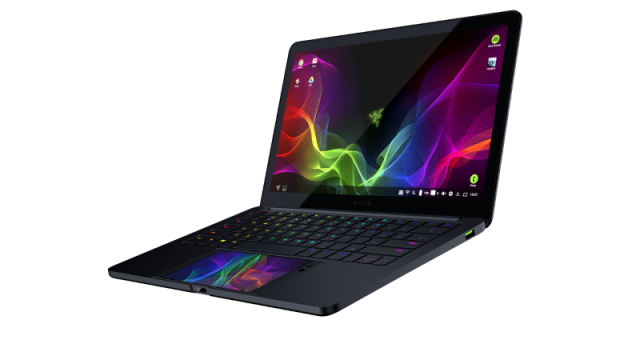 Razer, a company known mostly for creating high-end gaming PCs, has already made waves within the mobile industry by releasing a smartphone designed specifically for playing video games. However, the company seems to be prepared to make an even bigger leap by releasing a phone accessory the likes of which has never been seen before.

At CES 2018, the major electronics show, the company unveiled “Project Linda”. The unusual name refers to what, at first glance, appears to be a laptop. However, instead of the usual touchpad, Linda has a conspicuous gap that is about the right size in which to slide a smartphone.

It will be no surprise to learn that this is exactly what it is designed for. The laptop doesn't actually work unless it is docked with a Razer Phone, as it only turns on when combined with a smartphone. Slide the device in and press the dock button, and Linda turns on to serve as a gaming laptop.

The phone in this instance serves as the laptop's touchpad. However, it can also serve as a second display. This combines with Linda's 13.3-inch Quad HD touchscreen, allowing for a range of different gaming and entertainment options, including having two complementary apps open at once. However, Linda's screen is only 60Hz, which is an odd discrepancy when the phone's display is 120Hz.

The backlit keyboard also hints at Linda's purpose, as it contains several unique buttons that are designed to be used in combination with the phone. For example, there are buttons for the 'home', 'back', 'show all apps' and 'voice search' commands to match their functions in the Android OS that the Razer Phone uses.

The whole point of Project Linda is to further enhance the mobile gaming experience by allowing uses to use a full keyboard and a larger screen. It is also possible to connect a mouse to Linda for even more control over games.

In addition to these features, Project Linda includes a built-in power bank that charges the Razer Phone as it is docked. It will also come with 200GB of memory, so users can store their media on the device to free up space on the Razer Phone.

It might seem odd to think of a laptop powered by a mobile phone, but the Razer Phone already has many of the specifications needed for this purpose. For example, several laptops have already been released that use the same Snapdragon 835 processor as Razer's flagship smartphone, while the handset's speakers are more impressive than many laptop sound systems.

TechRadar's preliminary review of Project Linda was largely positive. Kevin Lee, the site's computing editor, said: “Performance on Project Linda was surprisingly smooth. Apps launched quickly and we were even able to play a mobile… game without any stutters or dropped frames.”

However, Mr Lee pointed out that there are currently no available apps that would make use of the dual-screen setup that Project Linda allows for, as it is – at the moment – the only peripheral that allows for this. Razer has said that it is working with developers to create programs for Linda.

This could well be the dawning of a new era for smartphones, as they become powerful enough to use with this kind of gaming accessory. However, there are some doubts over how successful Project Linda could be. One potential question is why consumers would purchase a phone and accessory just to imitate a laptop?

However, there is no denying that mobile gaming is currently a huge force to be reckoned with, and there are undoubtedly consumers who would appreciate an accessory that allows them to expand this experience. The price tag would likely be a big factor in how well Project Linda sells, but as of yet there has been no word from Razer on this.