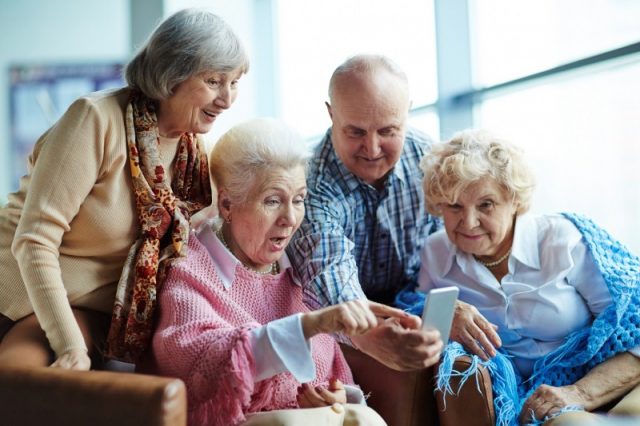 Older people are often portrayed as being scared of change or stubbornly intransigent, particularly when it comes to technology.

But a new survey by Mobiles.co.uk suggests that this couldn't be further from the truth.

According to the study, 49 per cent of over-50s use their mobiles every single day, Mobile News reports.

Figures also showed that texting was the most popular activity among older smartphone users (81 per cent).

This was followed by calling (58 per cent), taking photos (57 per cent) and checking the weather forecast (35 per cent).

And perhaps most significantly, 28 per cent of over-50s regularly use their smartphones to check social media.

It's a clear indication that young people might just have got their older counterparts wrong.

The idea of older people stubbornly refusing to use technology or sticking to outdated gadgets is a myth, if these figures are anything to go by.

Indeed, the research from Mobiles.co.uk also found that 90 per cent of over-50s love getting a brand new smartphone, while 42 per cent have a phone that's less than two years old.

A staggering 98 per cent, meanwhile, have a phone that's less than five years old, so they're not exactly hanging on to ancient bricks that aren't fit for purpose.

As a result, they aren't as intimidated by technology as young people might believe. In fact, 62 per cent of respondents said they feel very confident when they're using their handsets.

No wonder then that plenty of the survey respondents admit to getting wound up by the mistaken notion they're uncomfortable with technology.

Among them was 52-year-old Joolze Dymond, who said she gets frustrated when she is buying a new gadget and is treated in a patronising way.

“Sometimes the younger generations can be a bit condescending,” she said.

Andrew Cartledge, a mobile expert at Mobiles.co.uk, acknowledged that younger people “may seem the most enthusiastic when it comes to smart tech”.

However, he said it is worth remembering that manufacturers aren't tailoring their devices for any one demographic.

“Smartphones and tablets are designed to be universal and easy-to-learn, with layouts and gestures that feel natural, regardless of age,” he commented.

This, he said, means it is “important not to fall into the trap of expecting the older generation to be fearful of new technology and unsure of how to use the latest features”.

Mr Cartledge went on to note that while mobile phones have come a long way in the last ten years, having technology at home is not a new phenomenon.

He added that many people have been using technology for a whole generation, while smartphones and tablets represent “simply the latest evolution of the home computer”.

Older people have seen a lot of change in their lives, and it seems that most are far from scared by it- if anything they're excited and happily going along for the ride!