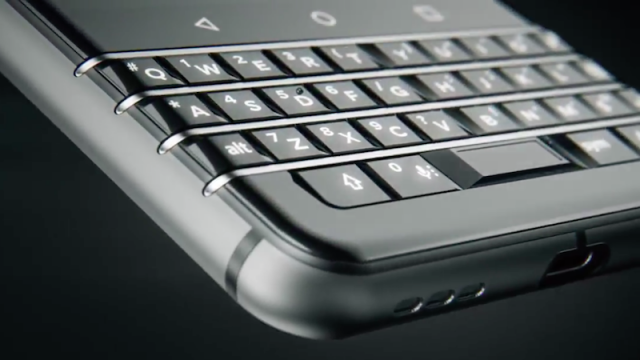 TCL Communication Technology Holdings took to the stage at the major industry showcase CES 2017 to preview a new BlackBerry smartphone, which will see a return of the iconic Qwerty keyboard.

Codenamed Mercury, the new phone was unveiled as part of a wider strategy that will see TCL offer an entire suite of mobility products.

A video posted on Twitter by TCL USA president Steve Cistulli offered a tantalising first glimpse of the new smartphone. It revealed a redesign that takes inspiration from the black rectangles of flagship smartphones from other manufactures, while simultaneously staying true to BlackBerry’s roots with trademark features such as the physical keyboard.

In the 22-second clip, a new metallic build was shown off that incorporates contemporary influences as well as classic BlackBerry features.

The Qwerty keyboard will allow users to type out messages and emails just as they would on a laptop or traditional desktop computer – and this comes with a 4.2-inch touchscreen, leaving the device a little smaller than most leading smartphones, such as the iPhone.

It also includes capacitive buttons that make it possible for users to touch-scroll and swipe across the handset to interact with icons on the display – much like how the BlackBerry Priv and Passport worked.

The ability to swipe along the keyboard to scroll through web pages and emails will save users time and avoid the inconvenience of having to constantly switch between two input modes.

Otherwise the keyboard appears to be very much in line with the BlackBerry tradition, incorporating four rows of sculpted keys separated by three slim metal frets. This shape and separation is designed to make them easy to type on.

TCL, which owns French smartphone company Alcatel and recently bought the rights to the BlackBerry brand, is the fourth largest handset maker in North America.

Mercury is part of what TCL calls a brand pillar approach that will see new products offered at a wide range of price points – entry level handsets, high-end options to compete with the likes of the iPhone and the Samsung Galaxy S series, in addition to related segments such as emerging technologies and the Internet of Things.

Mr Cistulli said the smartphone industry is in the middle of a major evolution, with consumers demanding more functionality and better value.

“To meet these growing demands, both carriers and retailers need a more diverse product offering, requiring portfolio efficiencies that were previously unavailable from a single manufacturer – until now,” he commented.

“We’re boldly evolving our business, offering end-to-end efficiencies from sales, through R&D, manufacturing and logistics. This business evolution will provide greater value to our customers in the premium postpaid and affordable no-contract tiers.

“We look forward to unveiling details around this distinctly different and impressively designed BlackBerry smartphone around the Mobile World Congress timeframe next month.”