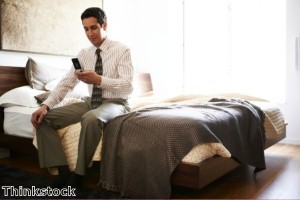 You may not have heard of nomophobia, but chances are you either suffer from it or know of someone who does. It’s a very real condition and is applicable to most if not all of us. How so? Well, it pertains to our smartphones.

In short, the condition – nomo stands for no mobile incidentally – is described as having a fear of being disconnected from such a device. And, as new research shows, it is a lot more serious that we may assume it to be.

Caglar Yildirim, a doctoral student in Iowa State University’s Human Computer Interaction programme and Ana-Paula Correia, an associate professor at the university’s School of Education, have come up with a way to test just how severe their nomophobia is.

They were, during their research, able to come up with four major characteristics of the condition, which we outline below.

People begin to feel insecure when they struggle to text, call or interact with their friends or family through their device.

People begin to feel a sense of unease when they become disconnected from the online version of themselves.

People begin to feel as though they are somewhat incompetent because they are unable to get Google to answer their questions.

People begin to feel that they lack the ability to successfully complete simple tasks – like booking a table for dinner – which they tend to do through their smartphone.

What the researchers also identified during their study was a gender divide – women are more likely than men to suffer from nomophobia. As to why, they do not yet know.

They duo were keen to highlight that a person’s dependence on their smartphone and a feeling of disquiet that arises when they are estranged from their device should not be seen as bad thing.

It should, however, be discussed when this disconnection starts to have a notable impact on a person’s mental health and their psychological wellbeing.