Netflix’s Too Hot To Handle has already taken the world by storm after being on the streaming service for just a week. The series involves a group of singletons thrown together in a beautiful villa in Mexico, with a $100,000 prize fund up for grabs – if they can refrain from sexual contact with each other for the duration.

One year on from filming and the cast members, who are from the UK, Ireland, Australia, Canada, and the US, are already receiving lots of media attention, but which contestants are the most popular with viewers on Instagram? And which are set to earn the most as an influencer now that the show has aired? 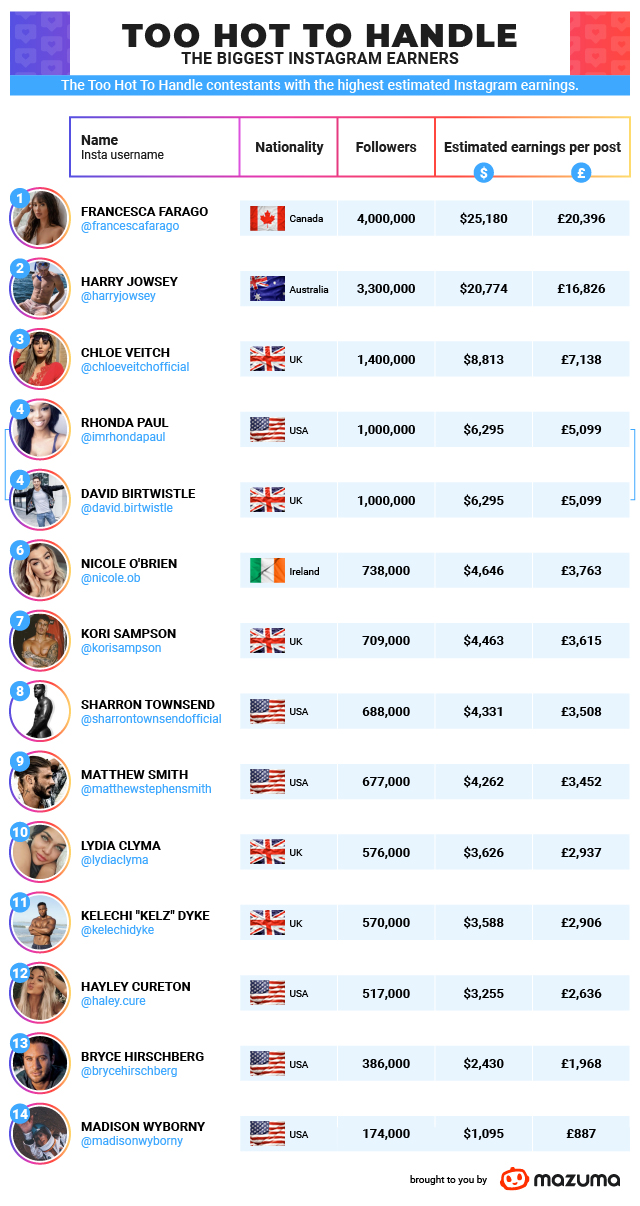 But who are the top three?

Francesca, the 25-year-old Canadian travel influencer, admitted from the offset that she is fearful of commitment, though has her ex-boyfriend’s name tattooed on the inside of her mouth. It is estimated that Francesca could earn up to $8813 per post, based on her 1.4 million followers.

It’s estimated that the 21-year-old – who won the New Zealand reality series ‘Heartbreak Island’ in 2018 – could earn up to $6206 per post on Instagram, following his appearance on Too Hot To Handle.

Who’s ready for the big reveal tomorrow? What do you think I’m going to post 😅😂 #TooHotToHandle

Essex girl Chloe, who at 20 years old is the youngest contestant on the show, is an estate agent and a model. It is estimated that she could earn up to $2971 per post, based on her 472,000 followers on Instagram.

Soaking up the rays. What are you all doing during isolation?❤️ #toohottohandle

Whilst probably spending most of their time on Instagram, it would be interesting to see how much time our Too Hot To handle influencers spend playing Games Consoles? Did you know Mazuma Mobile now buys your old Playstation 4, Xbox One, and Nintendo Switch consoles!