Over the last 50 years or so, the world has been blessed with some incredible video games and video game characters and they’ve both certainly come a long way in that time too.

From old favourites who started life as little more than a few blocky pixels, such as Pac-Man and Mario, to complex heroes played by Hollywood voice actors, we all have our favourites, but who are the world’s best-loved gaming characters? We’ve analysed global search volume to find out.

And if our list reminds you of any old games consoles that you’ve got collecting dust in the attic, why not consider selling your old PS4 or trading in your old Xbox One here at Mazuma to make some extra cash? 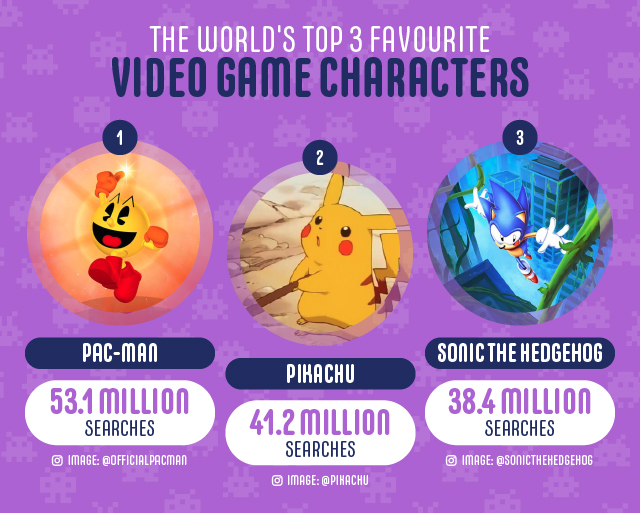 For all of the incredible advances in games over the last couple of decades, it seems that we can’t look past the classics when it comes to our favourite video game character, with Pac-Man taking the top spot.

Dating way back to 1980, the character is the mascot of Bandai Namco, has appeared in over 30 games over the years and has even had two TV shows and a hit single named after him!

The Pokémon franchise exploded in popularity in the late 90s, with over 150 characters to catch and train, but there was always one that stood out as the world’s favourite.

Pikachu first appeared in Pokémon Red and Blue before starring in his own Pokémon Yellow game, becoming an icon of Japanese pop culture in the process. He also appeared in his own live-action movie last year, Detective Pikachu, voiced by Ryan Reynolds.

A blue hedgehog that can run at supersonic speeds may sound like an unlikely video game hero, but Sonic quickly became one of the best-known video game characters in the world throughout the 90s.

He’s since appeared in numerous spin-off comics and adaptations, including a live-action movie which attracted attention for the wrong reasons, with fans heavily criticizing the character’s design, which was quickly redesigned at the last minute.

We looked at over 200 of the most popular video game characters of all time and for each, took the number of annual Google searches according to Google’s Keyword Planner.