It’s become increasingly common for video game publishers to turn to the past and revive, reboot and remaster some of their old favourites for the latest generation of consoles.

And rather than being seen as a desperate cash grab, reboots are generally embraced by gamers, who jump at the chance to replay some of their favourite games with the latest technology and visual upgrades that modern consoles bring.

Some of the best remakes of recent years include the likes of Resident Evil 2, Final Fantasy VII, and Ratchet & Clank, but what are the games that are yet to be given a modern-day facelift?

Why not sell your old PS4 or Xbox One console, and use the money to buy some retro games? Here at Mazuma, you can sell your PS4, sell your box one, or even sell your Nintendo Switch for cash. We guarantee that the price you see is the price you will get, and we’ll pay you the same day we receive your device.

We’ve used Google search volume to determine which are the retro games that people are still itching to play and could be ready for a remake. 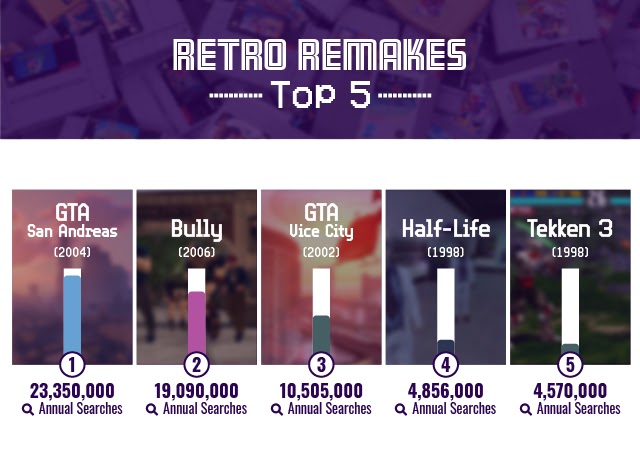 The Grand Theft Auto series is one of the most successful gaming franchises of all time, but it’s also one of the few that has never seen its massively popular games remade over the years. Fans have been crying out for remastered versions of old favourites such as San Andreas, with various fan-made trailers giving us a glimpse of what they could look like with a visual upgrade. However, creators Rockstar Games have their eyes firmly set on the future, so the chances for this one are almost zero, unfortunately.

In second place was another game from Rockstar, Bully, which was released back in 2006 (originally as Canis Canem Edit here in Europe). It was a hugely successful game and a sequel has been rumoured for years, and while a remastered ‘Scholarship Edition’ was released in 2008, fans are still waiting for news of any kind of follow-up.

Rounding out the top three was yet another Rockstar Games title, Grand Theft Auto: Vice City. Much like its successor San Andreas, Vice City has a loyal set of fans who have created numerous mods and trailers giving us a peek into how the neon lights of 1980s Miami might look in glorious HD, but alas, it looks like that might be the closest that we ever get to stepping back into the streets of Vice City.

Half-Life is a seminal game and was hugely influential on the first-person shooter genre when it was released in 1998, receiving over 50 “Game of the Year “ awards on PC. Its popularity has endured, with numerous fan-made mods which have gone to become standalone games in their own right, and while Valve themselves have never remastered the original, a third-party remake titled Black Mesa was in fact released last year.

Tekken 3 is one of the most popular installments in the famous Tekken series of fighting games, making the jump from the arcade to home consoles on the original PlayStation in 1998. Tekken 3 is cited as one of the greatest video games of all time and is also one of the console’s highest ever sellers, but a remake has never come to fruition.

The Complete List of Retro Games That Are Ready for a Remake!

In total, we analysed over 400 retro games from across the years, and our full list below shows the top 50 favourites that users are searched for the most on Google over the last twelve months. In our opinion, surely these classics must be ready for a new version soon?

If you can’t see your favourite game, there’s a good chance some form of remaster already exists!

Note that we’ve chosen to look at games from the seventh generation of consoles and earlier (that’s the era of the PS3, Xbox 360 and Wii) and have obviously excluded any games which have already been remade in recent years or have a remake in the pipeline, as well as the likes of Tetris, Pac-Man and other arcade games which have always been around in one form or another since initially being released.

We analysed over 400 games, sourced from various list articles, YouTube videos and Reddit discussions to see which are the games that people wanted to see remade, as well as some of the highest-rated and best-selling games of all time too.

For each, we took the number of Google searches made in the last twelve months (December 2019 – November 2020).

Note that we only looked at games from the seventh generation of consoles and earlier and excluded any games which have already been remade in recent years or have a remake in production.

We also excluded arcade games such as Tetris, Pac-Man which have technically already been remade many times over the years.

However, we did include games that have been ported straight to newer consoles with no graphical or technical upgrades, which can’t really be considered remakes.

This article has 1 comments