Which games see the most outages and disruptions?

For a lot of gamers, a poor connection or unreliable services can be one of the biggest deal-breakers. A game that doesn’t run properly or that won’t even start can quickly lose a fanbase. So, which games, franchises and services are disrupted the most?

As well as looking at the recorded outages for individual games, we also looked at the outages for gaming services, such as Discord, the PlayStation Network, Xbox Live and more, which can sometimes prevent gamers from getting online at all! 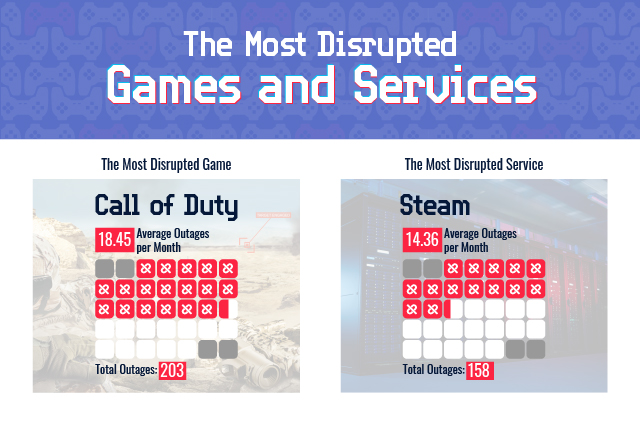 The Games with the Most Interruptions

Of the games that reported the most frequent problems, the Call of Duty franchise finishes further ahead than the next closest, League of Legends. Both of these franchises are well-known for their intense gameplay and rage-inducing moments with other players and so are very dependent on a reliable connection to the servers.

The Services with the Most Interruptions

Perhaps surprising to some, the services suffering from the most outages are the ones gamers rely on the most commonly, including Xbox Live and PlayStation Network, with Xbox Live coming out as more likely to be down, as gamers experienced approximately 10 outages a month in the last year. 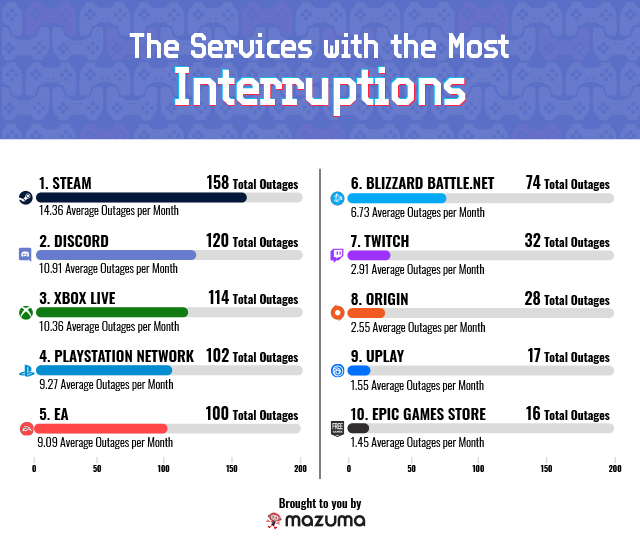 With gamers looking to sell their PS4 or sell their Xbox one ready to upgrade to the PS5 and Xbox series X/S knowing which online service is the most reliable could play an important role in determining which console to purchase.

For each game/service, we found out how many outages were reported to Downdetector between November 2019 and September 2020 (data for October 2020 was incomplete).

Some of the listed servers for games are also part of a wider franchise and have been labelled according to the specific game or franchise.