How much are the biggest streamers on Twitch making in a year?

Streaming your favourite games on Twitch, for the everyday person could just be a fun hobby, but for the biggest names in gaming, streaming on Twitch has become a legitimate career. From big-name titles such as League of Legends, Fortnite and Minecraft to smaller titles like Rust, Path of Exile and Dead by Daylight, there will most likely be a streamer out there playing a game you enjoy.

But who made the most money from streaming popular games in the last year? We’ve taken a look at 100 of the top streamers by the number of subscribers and the top 20 most popular streamed games to find out!

GAMERS EARNING THE MOST ON TWITCH 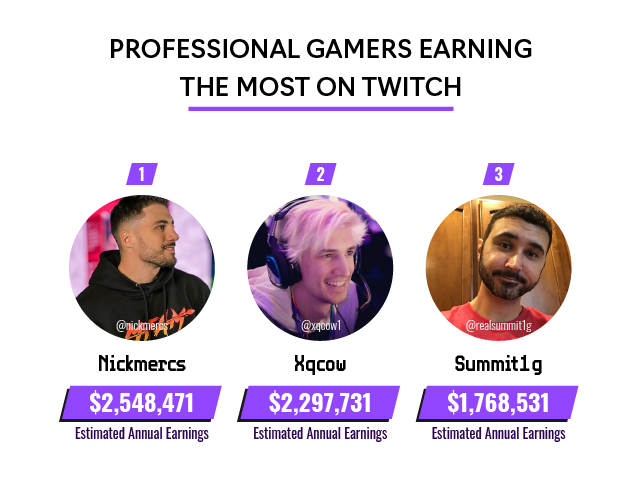 Starting in 2011, Nick Kolcheff, better known online as NICKMERCS, started his gaming career as a Gears of War pro, winning three Major League Gaming championships and dabbling in competitive Halo before transitioning to a career as a Call of Duty streamer. In 2016, he became a founding member of the newly formed 100 Thieves, a professional gaming organisation, and broke world records in Fornite for the most squad kills in a game.

Nowadays, NICKMERCS has moved to FaZe Clan, another gaming organisation, and primarily streams Call of Duty: Warzone to millions of adoring fans, making him estimated annual earnings of $2,548,471 on subscriptions alone.

You might be surprised to see that Ninja doesn’t make our top 10 for annual earnings, nor even the top 20. This is because Ninja moved to Microsoft owned Mixer in an exclusivity deal back in 2019. When Mixer closed down last year, Ninja moved back to Twitch, but with the missing revenue from those months away, Tyler “Ninja” Blevins has not made near the same amounts of his friends and rivals on the platform.

THE MOST WATCHED E-SPORTS GAMES

Despite being released nearly 12 years ago, League of Legends still tops the charts of the most-watched game of the last year. The Massive Multiplayer Online Game, which is said to have kicked off e-sports as a major sporting venture by many. The free-to-play game sees two teams of five players battle in player versus player combat, with each team occupying and defending their half of the map leading to tense and exciting gameplay, as much as any other traditional sport.

One to watch in the future, Valorant hit the market in June 2020 and in the six months of being active, it has had nearly 2.2 million concurrent viewers tune into the action on Twitch, placing it in the fourth spot on our list ahead of competitive gaming heavy-weights like Counter-strike: Global Offensive and Dota 2.

Discover the list of the top 20 most viewed games of the last year below! 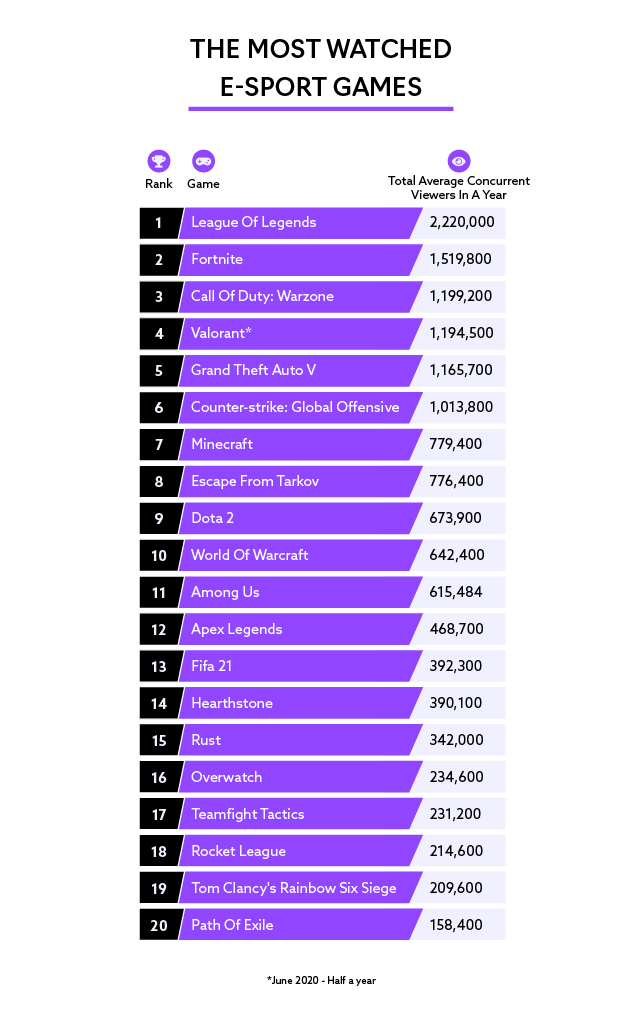 Have you recently upgraded to a PS5 or Xbox Series X and are now playing or streaming your favourite games such as League of Legends, Fortnite, and Fifa 21, and don’t know what to do with your old console? Here at Mazuma, you can sell your PS4, sell your box one, or even sell your Nintendo Switch for cash. We guarantee that the price you see is the price you will get, and we’ll pay you the same day we receive your device.

Streamers on Twitch can make money from multiple different revenue streams, however, we’ve chosen to focus purely on income from subscriptions as it’s the only avenue that can be estimated with a degree of accuracy.

Subscribers to Twitch streamers can choose from three levels of subscription, costing $5, $10 and $25. According to popular streamer Disguised Toast, Twitch keeps 30% of this revenue for themselves, with the streamer taking the other 70%.

Using TwitchTracker, we used the list of channels with the most subscribers ranked by the number of subscriptions made from January 1st till 2nd February 2021. TwitchTracker does state that this list contains channels that were either authorized or manually selected; it’s not complete so all the values may have an uncertain margin of error. The number of followers for each Twitch channel was taken from Social Blade.

We used the number of subscribers from February 2020 to January 2021 as the average each streamer would get over a year to calculate estimated annual subscriber income, before calculating the 70% that goes to the streamer, doing so for the 100 accounts with the most subscribers. Some streamers did not have a full year worth of data due to them being new or returning to the platform (for example Ninja).

To find out the 20 most-watched games on Twitch in 2020 we used TwitchTracker’s Most Watched Games On Twitch Ranked By Average Concurrent Viewers For The Last 7 Days list. We then took the average concurrent viewers from February 2020 to January 2021 to calculate the total numbers of viewers over this period to find the most-watched game on Twitch. Some games did not have a year worth of data due to when the game was released, for example, Fifa 21 only came on the market in October 2020. Note that the categories described as ‘Just Chatting’, ‘Music’, ‘Chess’ and ‘Slots’ were not included in the list as they are not considered traditional video games.